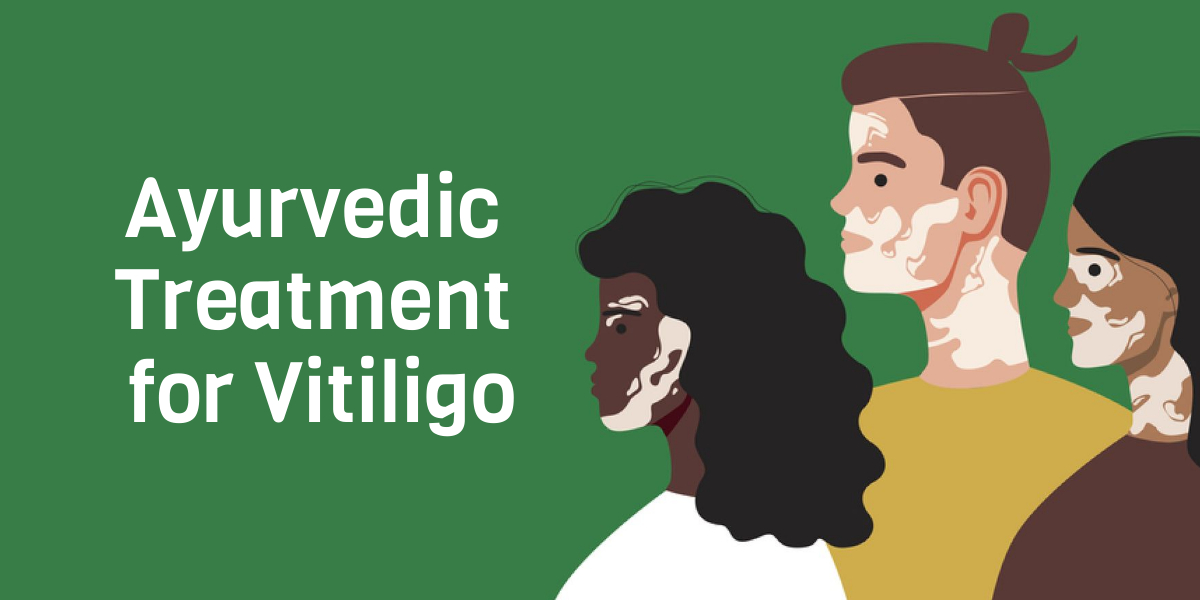 Vitiligo is also known as leucoderma or white patches in the common man’s language. Vitiligo is as old as mankind and not new to Ayurveda. In Ayurveda vitiligo has been described as Shwitra. In the Sanskrit language, shwitra means whitish. Its also called shweta kusta, kilasa, aruna, shouklya.

Shwitra is one of the skin diseases which is considered to be challenging to treat or cure. Ayurveda texts have explained about causes, symptoms, and ayurvedic treatments for vitiligo in detail.

Vitiligo is a condition where the skin turns white in patches. Progressive loss of melanocytes in the skin (which are responsible for skin color), results in depigmented patches of the skin.

Vitiligo can affect the skin on any part of the body. The patches may vary from smaller to big. The vitiligo patches grow bigger or spread with time.

Vitiligo can affect the hair and on inside of the mouth.

Vitiligo has been classed into two major forms

Vitiligo affects 0.5%-1% of the world’s population.

Though vitiligo affects both males and females, female cases are a little higher compared to the male population.

Genetic factors are also responsible for vitiligo as approximately 30% of the patients have a family history of vitiligo.

The main symptom of vitiligo is depigmentation or loss of natural color.

Who can get Vitiligo?

Vitiligo is seen more in people who have a family history of vitiligo or who have any autoimmune diseases.

Anyone can get vitiligo anytime and at any age. The majority of people see white patches appearing before the age of 20 years or even in childhood.

Vitiligo is also seen in people who are having certain autoimmune diseases.

Vitiligo is gradually progressive, but sometimes can spread rapidly and can remain stable for a long time.

The diagnosis of vitiligo is done in a clinical examination as it shows a specific appearance.

Wood’s light examination is done when the symptoms are not clear and mimics other hypomelanotic disorders.

Vitiligo has no cure. Vitiligo treatments can help to slow the progression of the discoloration. Results of the vitiligo treatment vary from person to person and are unsatisfactory.

Vitiligo is known as Shweta kushta in Ayurveda. Shwitra, Kilasa, Aruna, Shouklya are also the synonym for vitiligo in Ayurveda.

Causes for Shwitra according to Ayurveda

Ayurvedic texts mention the following factors are responsible for shwitra

How does shwitra start? Ayurvedic view

Due to the causative factors the three doshas vata, pitta, and kapha gets aggravated travel through channels(siras) to reach rasa (watery element), rakta (blood), mamsa (muscle) dhatus (elements) and disturb their functions. Then the doshas travel to the external surface of the body and produce vitiligo (shwitra)

Vitiligo classification according to Ayurveda

Vitiligo classification ayurveda has done depending on the dosha predominance. They are three in number as follows

Vitiligo which has black hairs on the skin, very few patches, not joined together, recent onset, and which is not due to burning by fire is considered curable.

When the lesions appear on genitals, palms, and lips are incurable even if they are newly started.

When more than one colored lesion and a combination of two or more doshas are considered difficult to cure.

Ayurvedic treatment for vitiligo includes both purificatory and administration medicines.

Due to its chronic nature, one may need to undergo repeated purificatory procedures such as panchakarma treatments.

What to avoid in Vitiligo

Vitiligo is known as shwitra in ayurveda. As vitiligo is having no cure treatments help to prevent the progression of the disease.

ayurvedic treatments for vitiligo include purification of the body to expel morbid doshas and medicine help to normalize the doshas.

Application of medicated oils, ghee, powders, and paste are also advised depending on the severity of the disease.

ayurvedic treatments for vitiligo show remarkable results in vitiligo by preventing further progression of the disease along with improving pigmentation on the lesions.

For more information about Ayurvedic Treatment for Vitiligo, you can call us at +9945850945

Limited consultations per day with prior appointments only.

Prior Appointment is Must for Visiting